Conflict of interest: None

Intraoperative transesophageal echocardiography (TEE) examination has evolved in cardiac and major vascular surgeries. It is not only useful in guiding hemodynamic interventions but also useful in surgical decision-making. It is necessary for the detection of intracardiac mass. Primary leiomyosarcoma confined to inferior vena cava (IVC) and without cardiac extension entails en bloc excision which seldom requires intracardiac exploration unless embolization. The embolization of the tumor causes hemodynamic alteration and can be confirmed by perioperative TEE evaluation. We are reporting a case where TEE salvaged from the wreckage by converting an extracardiac vascular procedure to intracardiac exploration under cardiopulmonary bypass.

Leiomyosarcoma is the most common primary tumor of inferior vena cava (IVC), though primary vascular leiomyosarcoma is a rare entity.1 These are mesenchymal tumors arising from vascular smooth muscle cells and involve various segments of IVC like below renal veins (type I), between the renal vein and retrohepatic segment (type II) or suprahepatic IVC (type III).2 The gold standard treatment is en bloc excision of the tumor3 that may not require cardiopulmonary bypass (CPB) unless there is an intracardiac extension or metastatic cardiac involvement.

A 40-year-old woman was admitted with pain abdomen for 20 days and on abdominal examination, a vague non-pulsatile mass was palpated in the right hypochondrium where only lateral and inferior border was perceived. Ultrasound of abdomen revealed 55.7 × 88.5 mm well-defined hypoechoic mass lesion in the upper retroperitoneum. Contrast-enhanced computed tomography (CECT) confirmed 90 × 54 mm (L1–L3 level) well-defined heterogeneously enhancing soft tissue lesion in the lumen of intra- and infra-hepatic IVC causing obliteration and expansion of lumen with a small exophytic component. The mass was extending into the right renal vein up to the renal hilum. Anteriorly, the lesion was abutting the uncinate process of the pancreas. On CT angiogram, the lesion was found to arising from infra-hepatic IVC, extending up to intrahepatic IVC and the suprahepatic IVC was free. There was no infiltration in the liver parenchyma, duodenum, and aorta. 99m Tc-LLEC renal dynamic scan showed normal functioning bilateral kidney with right kidney contributing 45% of the function.

The investigations were suggestive of leiomyosarcoma of IVC and therefore en bloc excision, i.e., leiomyosarcoma excision with right nephrectomy, caudate lobe excision followed by IVC reconstruction was planned in the cardiac surgical operation theater (OT) by a multidisciplinary team.

The patient was premedicated with oral alprazolam the night before surgery. On arrival to the OT, standard ASA monitors connected along with near-infrared spectroscopy (NIRS). 16G peripheral venous access and 20G arterial access were secured in the right upper limb. The patient was induced with fentanyl 100 μg, midazolam 2 mg, propofol 100 mg, and rocuronium 50 mg, and the airway was secured with a cuffed endotracheal tube. A central venous catheter was secured in the right internal jugular vein and 16G leader Cath was inserted into the left femoral artery. Anesthesia was maintained with infusion dexmedetomidine, infusion cis-atracurium, and titrated isoflurane inhalation. Transesophageal echocardiography probe and temperature probe were inserted.

On TEE examination, there was an exophytic heterogeneous mass extending in the retrohepatic IVC, the suprahepatic IVC, and the hepatic vein was free. The tumor is located 2.07 and 3.9 cm below the hepatic vein and IVC-RA junction, respectively. The retrohepatic portion of the tumor was around 4.53 × 2.39 cm and caused expansion of the IVC lumen (Fig. 1). The suprahepatic portion of IVC was free and there were no emboli in cardiac chambers. The echogenicity of liver parenchyma was normal and the portal veins are free. The right kidney showed normal echotexture (Fig. 2) but turbulence found in the renal vessel. The left and right ventricular functions were normal with normal valvular function. There was no patent foramen ovale (PFO). 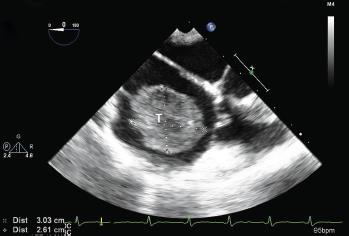 Midline laparotomy with right lateral extension was performed by the surgeon for better access. They looped the infra-renal IVC, infrahepatic IVC, and renal vein separately. After looping, the blood pressure decreased suddenly along with a decrease in heart rate. The patient was resuscitated with volume infusion and Trendelenburg position. On TEE examination, the retrohepatic portion of the tumor (2.6 × 3 cm) was found to be embolized causing ball valve occlusion of the tricuspid valve (Figs 3 and 4). The retrohepatic IVC was free and the whole tumor was occluding the tricuspid valve causing hemodynamic disturbances.

A surgical master plan was changed to take out the embolized tumor from the right atrium under CPB followed by en bloc infra-hepatic tumor excision. Midline sternotomy was performed and after adequate heparinization, CPB was instituted. The embolized tumor was excised from the right atrium. After 144 minutes of CPB, the patient was weaned from CPB with nitroglycerin infusion, and heparin was reversed with protamine. Then, en bloc excision of the tumor was carried out along with right nephrectomy (Fig. 5) and IVC reconstruction with interposition graft and implantation of the left renal vein to the IVC graft. Transesophageal echocardiography revealed complete excision of IVC tumor and patency of interposition graft without kinking (Fig. 6). During the intraoperative period, the patient required a massive transfusion of 6 units of packed red blood cell (RBC), 2 units of platelet concentrate, fresh frozen plasma, and cryoprecipitate with noradrenaline support. 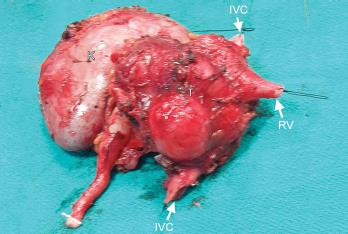 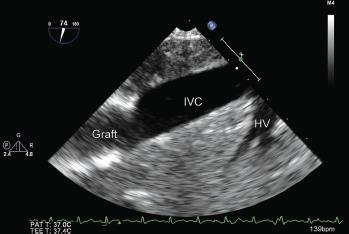 Leiomyosarcoma of the IVC is a rare malignant tumor that was first described by Perl in 1871 and the first surgical resection was performed by Melchior in 1928.4,5 It was more common in the female with female and male ratio being 3:1 and commonly occurs in the fifth to sixth decade of life.1 The tumor growth rate was slow and usually patient present at a later stage with vague symptoms. Computed tomography (CT) and magnetic resonance imaging (MRI) were the investigation of choice for the determination of tumor extent and the echocardiography was essential for eliminating cardiac extension. Surgical resection with negative margins is the primary treatment modality.6

As per the classification by èKulaylat et al.,2 the tumor in our case falls into the type II category without cardiac involvement. Therefore, en bloc excision was planned in cardiac OT. There is always a chance of embolization or major vascular injury for which operation was performed by multidisciplinary team constituting oncosurgery, cardiovascular surgery, cardiac anesthesia, etc. Exceptional to general surgery, CPB was primed and perfusion team was ready and a TEE probe was inserted to avoid any untoward event.

Intraoperatively, TEE evaluation revealed the extent of the tumor and determine exclusion of suprahepatic IVC as well as cardiac chambers from the tumor. During hemodynamic alteration, TEE played a key role in finding ball valve emboli occluding tricuspid valve which is the game-changer for the plan of surgery. The extracardiac repair was converted into intracardiac exploration followed by tumor excision.

The excision of leiomyosarcoma of IVC without cardiac extension can land into a cardiac surgery involving CPB. The tumor can embolize any time while mobilizing the IVC causing hemodynamic worsening. Therefore, vigilant monitoring is essential and the role of TEE cannot be forgettable. In our case, though the tumor has extended up to the retrohepatic part of IVC during looping of IVC the tumor embolized causing a decrease in cardiac output. Here, TEE helped to prevent the wreckage and alter the surgical path. Therefore, TEE evaluation to be considered in any IVC tumor, even without intracardiac involvement.

We acknowledge the surgical and perfusion teams for the team work in managing the case.