Conflict of interest: None

Massive myocardial infarction can lead to left ventricular free wall rupture (LVFWR). Sometimes it can be contained by a pericardium leading to the formation of the pseudoaneurysm. In view of the high tendency to expand and rupture an urgent surgery is indicated. We experienced a rare case of giant left ventricular apical pseudoaneurysm which was successfully managed with surgical intervention.

A 47-year-old male patient came to our hospital with an acute onset of chest pain and was diagnosed with anterior wall myocardial infarction (MI) which was managed conservatively. Four weeks later, he came to his physician with a complaint of heaviness in the chest for 12 hours. Transthoracic echocardiogram (TTE) revealed a large 12 × 10 cm pseudoaneurysm located at the left ventricular (LV) apex that communicated with the pericardial cavity through a 24-mm defect (Fig. 1 and Video 1). Flow across the defect was confirmed by color flow Doppler (Fig. 2 and Video 2). Coronary angiography revealed complete occlusion of the left anterior descending artery. Emergency surgery was planned in view of a massive LV pseudoaneurysm. After the induction of anesthesia, a median sternotomy was done. A large LV apical pseudoaneurysm was visualized which was contained by a thick, densely adherent fibrous capsule of the pericardium. The cardiopulmonary bypass (CPB) was initiated after systemic heparinization. After aortic cross-clamp, a complete dissection of the heart was performed, to avoid systemic embolization. Antegrade cold blood cardioplegia was delivered to arrest the heart. The aneurysm sac was opened by a longitudinal incision (Fig. 3). The defect was located close to the apex of the LV, which was closed with a Gore-Tex patch to avoid possible distortion of the heart structures. Bio-glue was applied over it and the patient was taken off bypass. The CPB was terminated with ionotropic support of milrinone 0.4 μg/kg/minute and noradrenaline of 0.05 μg/kg/minute. The patient was successfully shifted to the intensive care unit with stable hemodynamics and the trachea was extubated after 24 hours. Written informed consent was taken from the patient. 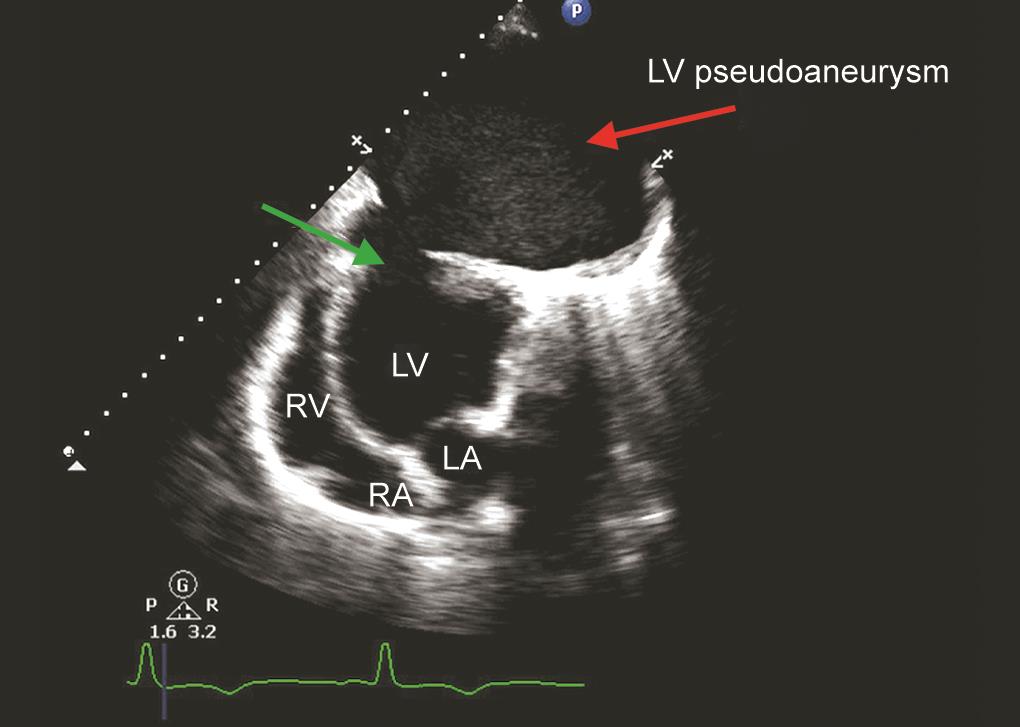 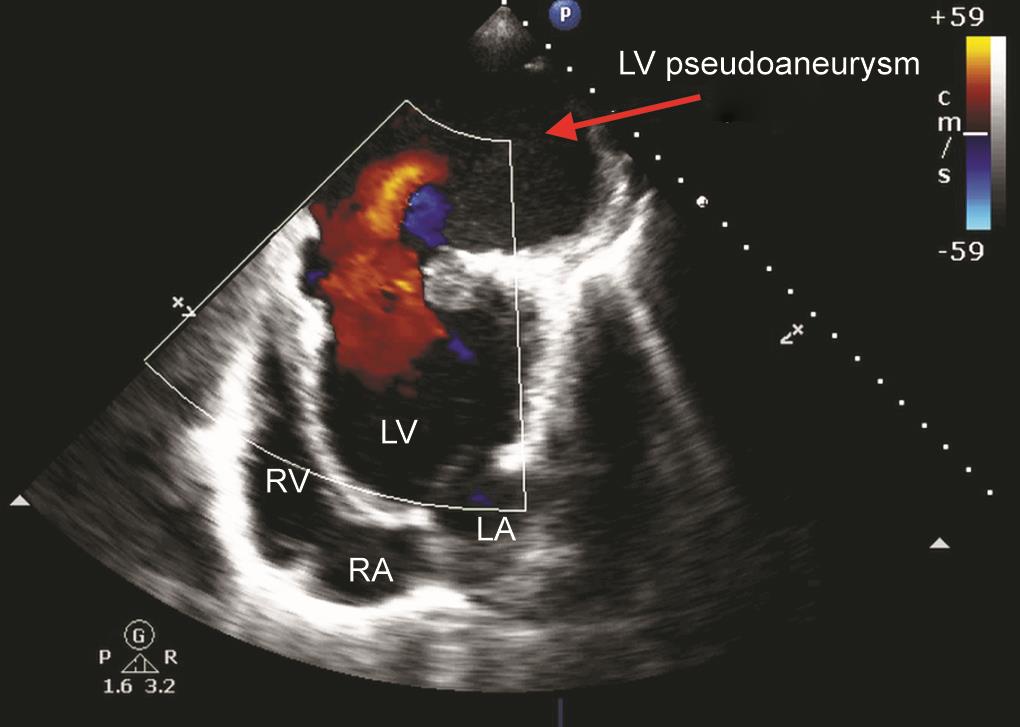 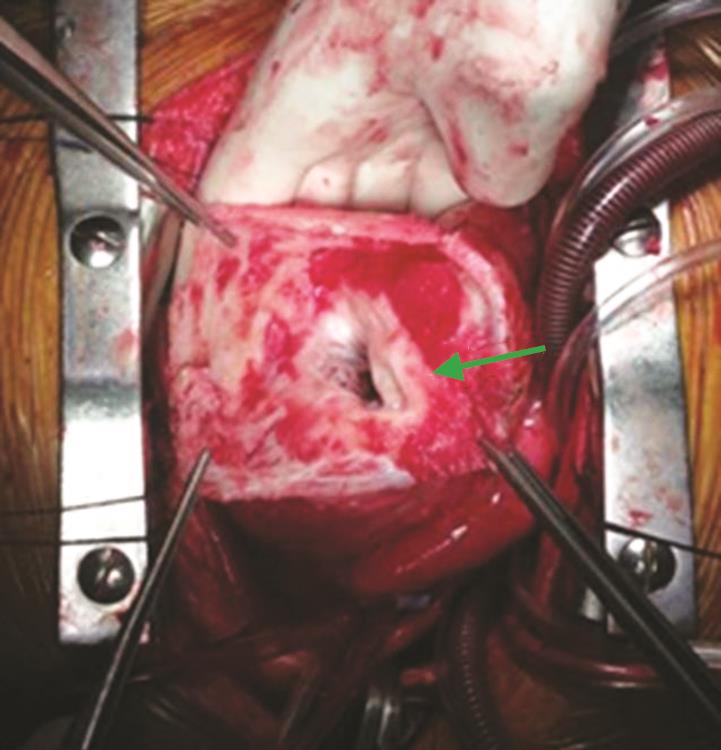 The left ventricular free wall rupture (LVFWR) after MI decreased drastically in the current era due to the advancement of effective early revascularization strategies. Sudden cardiac death is a common sequel of LVFWR; however, in some cases, it can be contained by the superimposing adherent pericardium resulting in the formation of the pseudoaneurysm. The pseudoaneurysm communicates with the LV cavity by a narrow neck, whose diameter is <50% of the maximum internal dimensions of an aneurysm.1 Whereas, LV true aneurysm develops due to scar thinning of the myocardial wall after MI. ILV true aneurysm contains all the three layers of LV, i.e., endocardium, myocardium, and epicardium, and has a wide neck and smooth margins. The posterolateral wall is the most common location for LV pseudoaneurysm, whereas, a true aneurysm, is located commonly in the apico-anterior wall. Transthoracic echocardiogram is used as an initial diagnostic modality for the assessment of the heart after MI. It not only helps in diagnosis but also helps in determining the location and extent of the lesion (Table 1). However, apical aneurysms can be difficult to visualize in TTE as they usually have thin walls and extend beyond the expected location of the apex, particularly in patients with large body habitus and poor acoustic windows. This pitfall can be overcome by cardiac computer tomography or magnetic resonance imaging.2 Due to its high tendency to expand and rupture, early surgical intervention is recommended in LV pseudoaneurysm. In high-risk surgical candidates, the transcatheter closure of the LV pseudoaneurysm is a feasible alternative by using multiple imaging modalities.3 Our case had developed a giant LV pseudoaneurysm 4 weeks after the development of MI which was successfully managed by the surgical intervention.